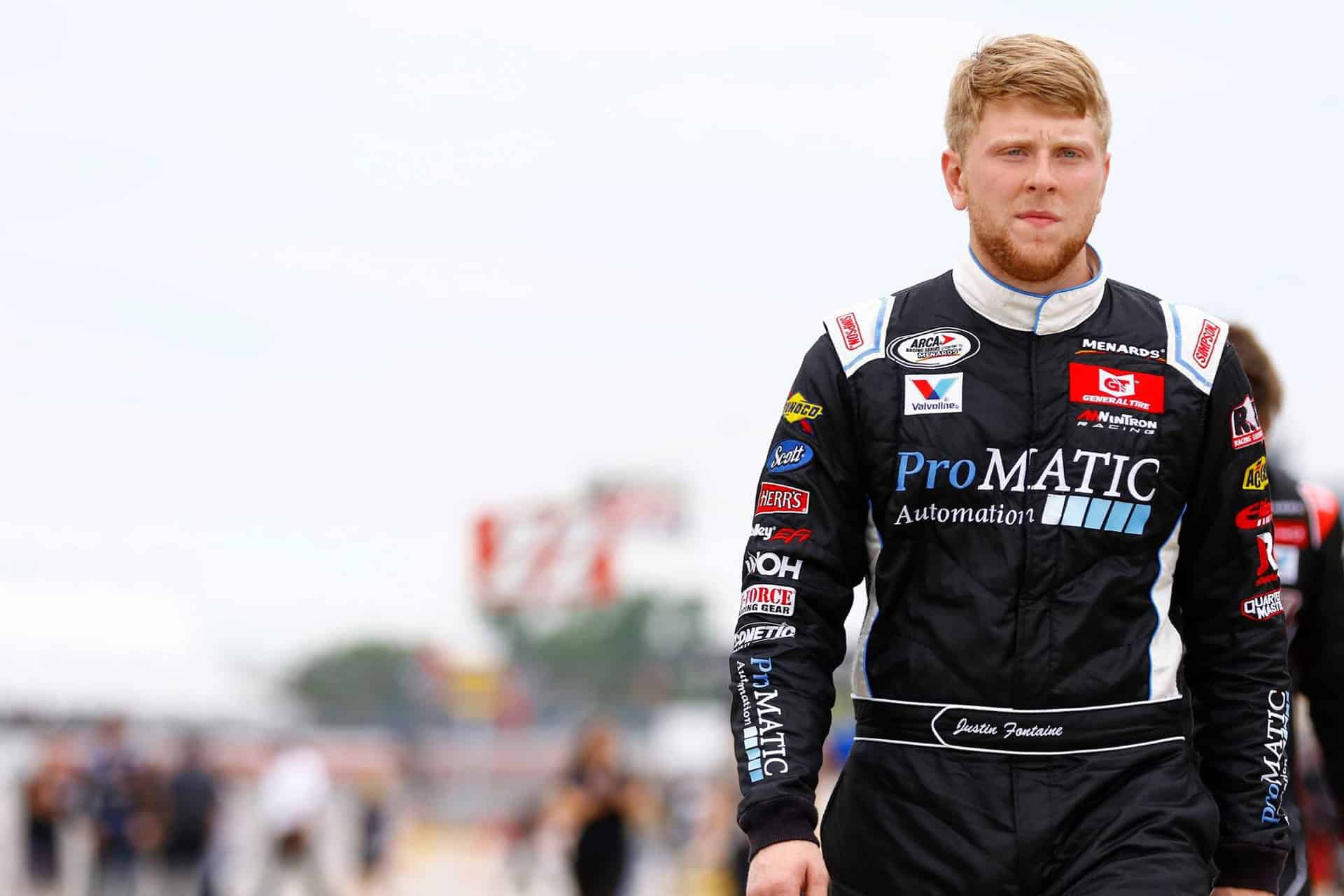 CLERMONT, Ind. Officials from AM Racing and their development team Win-Tron Racing in a collaboration with Bolen Motorsports announced today that ARCA Racing Series newcomer Justin Fontaine (@driverFontaine) will pull double duty at Pocono (Pa.) Raceway next weekend competing in both the ARCA and NASCAR Camping World Truck Series (NCWTS) races on July 28 and 29 respectively.

Fontaine, 19, will make his return to the Truck Series since making his debut at Martinsville (Va.) Speedway last October aboard the No. 66 ProMATIC Automation Toyota Tundra.

This season, the Asheville, N.C. native has been competing in the ARCA Racing Series aboard the No. 33 ProMATIC Automation Toyota.

Currently, Fontaine sits 14th in the championship standings despite missing four races after suffering a mild compression fracture of his L1 vertebrae during a late-race accident in the ARCA season-opener at Daytona (Fla.) International Speedway on Feb. 18.

ProMATIC Automation Inc., which specializes in the design and build of custom factory automation equipment will also expand its partnership for Pocono and serve as the title partner for both races.

“Im very excited to have the opportunity to compete in both the ARCA and Truck races next weekend at Pocono,” said Fontaine. “Both AM and Win-Tron Racing are giving me equipment that I’m confident that I can show my capabilities as a driver, while offering the chance to bring the most exposure possible to our marketing partners.”

In June, Fontaine made his Pocono ARCA debut, but his finish was hindered after being forced to pit under green flag conditions late in the General Tire #AnywhereIsPossible 200, finishing 21st.

Still, the avid late model racer believes his prior experience at the 2.5-mile triangle will be a benefit when he attempts to compete 300 miles around the “Tricky Triangle.”

“The more laps I made around Pocono Raceway, the more comfortable I became,â€ added Fontaine. â€œI learned very quickly that Pocono is a rhythm track and I believe that competing in both the ARCA and Truck races will allow me to stay in that rhythm and provide an opportunity to have two good finishes.”

“I know the Truck Series field is very tough right now, but if we can keep our truck clean and leave Pocono with a top-20 finish, that’s a finish that we can build on for hopefully another opportunity later in the year.”

AM Racing team principal Tim Self orchestrated the collaborative effort with Bolen Motorsports for the upcoming Pocono Mountains 150. Self, a successful entrepreneur from Austin, Tex. says Fontaine has worked hard not only to recover from a serious back injury, but to become a better race car driver since his return to the seat last month.

I’m very proud of the gains that Justin has made this season,” noted Self. “Since coming to AM Racing last fall, he has done a great job of preserving through adversity while continuing to work on becoming a better driver both on and off the track. I’m confident that he’ll be able to tackle his greatest challenges yet at Pocono and excel and make everyone at AM Racing proud.”

In addition to ProMATIC Automation, Fontaine will have additional marketing partnership support from Accu-Tech, Snap Track, AM Technical Solutions, Superior Essex and Legrand for his second career NCWTS start.