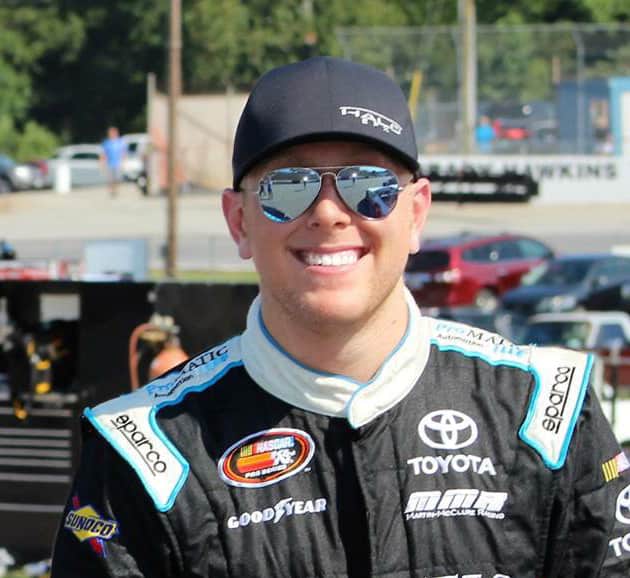 MOORESVILLE, N.C. – Officials from AM Racing announced that Asheville, N.C. native Justin Fontaine will return with the organization for a limited NASCAR Camping World Truck Series (NCWTS) schedule next season.

Fontaine, 19, joins AM Racing regular driver Austin Wayne Self who was recently announced as a returning driver for the Mooresville, N.C.-based team in their sophomore season of competition.

With the addition of Fontaine to the team’s roster, AM Racing plans to expand their operation to a two-truck team for several events to be named at a later date.

Fontaine made his Truck Series debut for AM Racing this past October at Martinsville (Va.) Speedway aboard the team’s No. 22 ProMATIC Toyota Tundra. After qualifying 28th, he finished 26th.

“It is an absolute pleasure to be re-joining AM Racing for 2017,” said Fontaine. “Since I’ve been with the team, I have seen nothing but the upmost professionalism from everyone within the organization and I can’t wait to continue to build upon what we started at Martinsville.”

A three-year veteran of the NASCAR Whelen All-American Series, Fontaine advanced his career with four NASCAR K&N Pro Series East starts this season before diving into one of NASCAR’s top-three national series. Making the move up the ranks, he began his career racing Quarter Midgets, Mini Cup and Late Models on local short tracks throughout North Carolina and Tennessee.

“My primary goal for 2017 is to simply learn as much as I can,” added Fontaine. “With a part time schedule, it’s more difficult to take in everything the trucks have to offer, but with the team we have I believe I can learn quickly and be an effective member of this team.

“I learned so much at Martinsville, from the way the trucks drive to what I can expect from my fellow competitors. I felt like I took to the trucks even quicker than I did the K&N cars, despite what the results say. The professionalism and competition within the series is incredible, and I can’t wait to be back next year.”

To enhance his motorsports skills, Fontaine will also run in the ARCA Racing Series presented by Menards events for Win-Tron Racing, the driver development partner of AM Racing next season. Fontaine will partake in the upcoming test session at Daytona (Fla.) International Speedway next month, then return for the series’ season-opener on Feb. 18.

“We’re extremely pleased and glad to have Justin back with AM Racing in 2017,” said AM Racing team principal Tim Self. “Justin is a hardcore racer with a desire to work hard on and off the track, while carrying an upbeat contagious demeanor. We’re eager to see his progression and success next year.”

To learn more information on AM Racing please visit awsracing.com.

AM Racing is a second-year NASCAR Camping World Truck Series (NCWTS) team owned by entrepreneur Tim Self. Established in December 2015, AM Racing is headquartered in Mooresville, N.C. Operated by Self, a native of Austin, Texas, the team is prided on faith, honesty and intelligent performance. The team has named Austin Wayne Self and Justin Fontaine as AM Racing drivers for 2017.