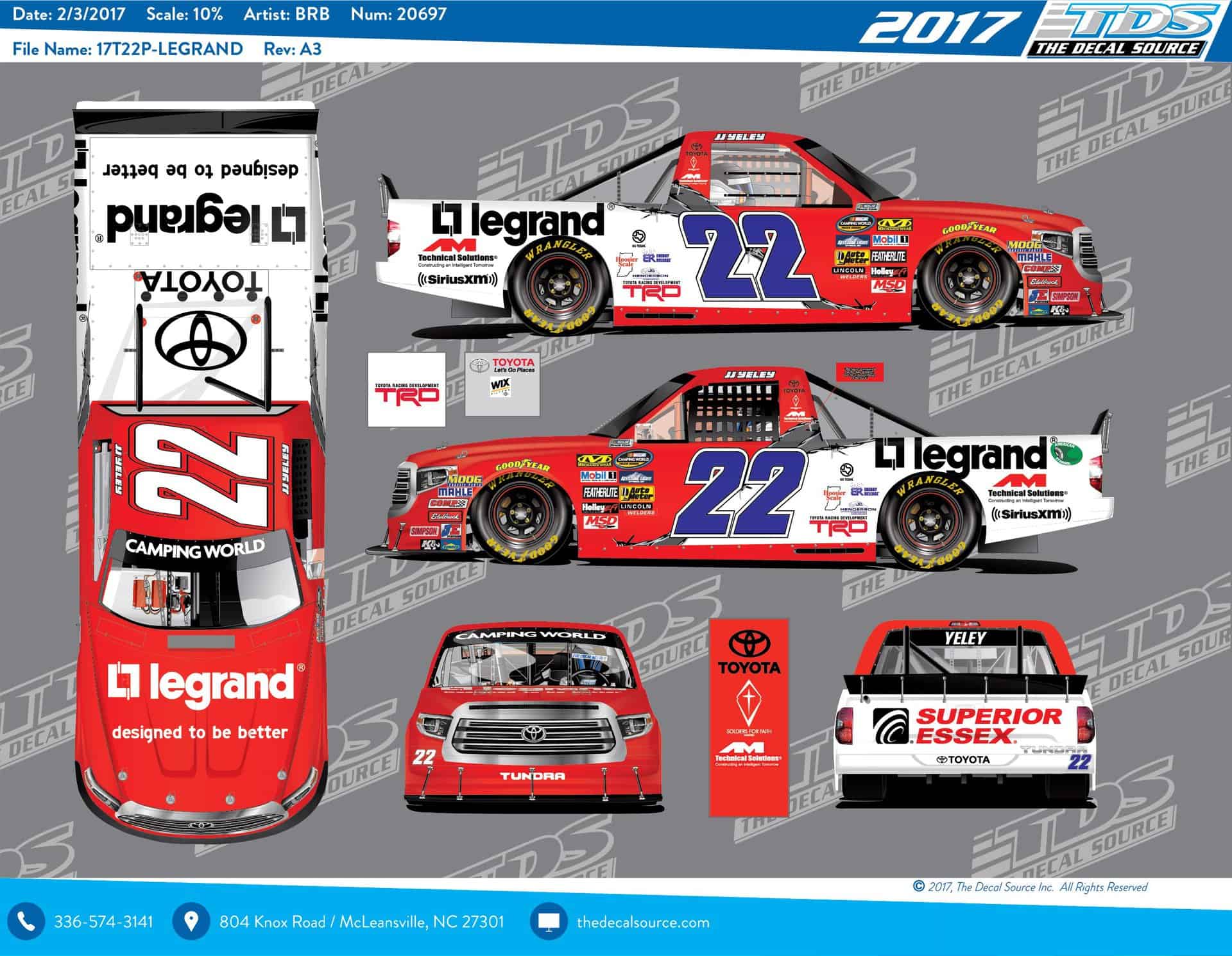 Yeley, a native of Phoenix, Ariz. will make his 23rd career NCWTS start and first since last March’s race at Atlanta (Ga.) Motor Speedway. In Yeley’s previous 22 starts, the two-time USAC Sprint Car champion has one start at the “World Center of Racing” in 2010 resulting in 10th place finish.

The partnership for now is a one-race agreement with industry veteran Rick Ren serving as crew chief.

Yeley’s efforts will be backed by Legrand and Superior Essex.

“I am looking forward to being behind the wheel of the No. 22 Superior Essex Toyota for the season opener at Daytona International Speedway in the Camping World Truck Series,” said Yeley. “It’s a great opportunity that Tim Self, AM Racing, Legrand and Superior Essex put together, and I’m glad to be a part of it. I can’t wait to get out on the track and drive the Toyota Tundra to the front.”

Legrand is a leader in network infrastructure solutions, with products designed to support data centers,  commercial buildings or audio / video applications, connectivity products that meet industry standards and rack cabinets that can be manufactured globally.

“This is a great opportunity for AM Racing,” said AM Racing team principal Tim Self. “The team has built JJ a very strong truck for competition with the hope that we can contend for the win at Daytona in a few weeks. JJ has a niche for the draft and we feel that he can not only put our team and partners in the spotlight, but also give us a good assessment of our truck program overall.”

Overall, Yeley, 40, has a combined 23 starts at the 2.5-mile superspeedway across NASCAR’s top-three national divisions with two XFINITY Series poles, one top-five and four top-10s. Yeley’s best finish at Daytona is fourth in the 2006 XFINITY Series opener after starting on the pole driving for Joe Gibbs Racing.

Last week, the Mooresville, North Carolina-based team announced they have switched engine manufacturers for the 2017 season. Joe Gibbs Racing engines will power the team’s Toyota Tundras this season starting with the 100-lap race at Daytona.

Details of AM Racing’s second driver and marketing partnership(s) lineup for Daytona is forthcoming.

JJ Yeley began his racing career at age 14, rising to prominence as he continued to add victories and record-breaking performances to his track record. In 1998 at the age of 21, he became the youngest driver at the time to qualify for the Indianapolis 500.

In 2003, he broke the record for single-season victories with 24 USAC wins, and joined Tony Stewart as only the second driver in USAC history to win the “Triple Crown” by taking the Midget, Sprint and Silver Crown championships in a single season.

From USAC, Yeley moved to NASCAR where he has enjoyed a modest career competing in the sport’s top-three divisions. In addition to racing, Yeley participates in numerous charities nationwide, with a special interest in children’s charities and fund raising events.

Legrand is a complete end to end solutions provider with a range of connectivity, physical infrastructure, cable management, pathways and power and cooling solutions for the data center to maximize network performance, energy efficiency and capacity for today and tomorrow’s demands.

Legrand is a leader in network infrastructure solutions, with products designed to support data center, commercial buildings or audio/video applications, connectivity products that meet industry standards and racks and cabinets that can be manufactured globally.

AM Racing is a second-year NASCAR Camping World Truck Series (NCWTS) team owned by entrepreneur Tim Self. Established in December 2015, AM Racing is headquartered in Mooresville, N.C. Operated by Self, a native of Austin, Texas, the team is prided on faith, honesty and intelligent performance. The team has named Austin Wayne Self, Justin Fontaine and JJ Yeley as AM Racing drivers for 2017.