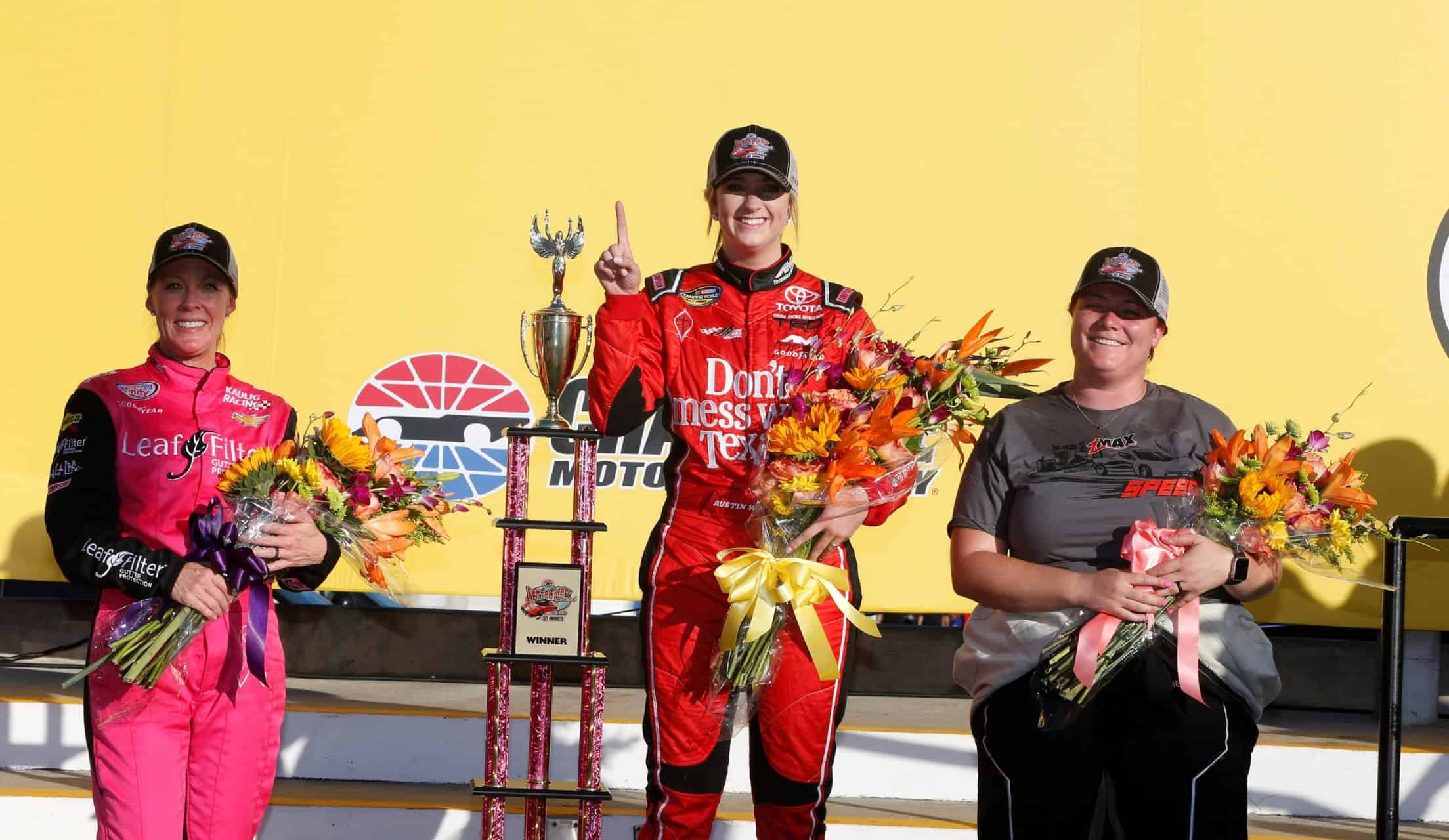 MOORESVILLE, N.C. – Looking more like a seasoned veteran than a care-free rookie competitor, Jennifer Anderson stormed into Victory Lane this past Friday night at Charlotte (N.C.) Motor Speedway in the seventh-annual Better Half Dash.

The 25-lap Bandolero charity event among the better halves of NASCAR personalities saw Anderson prevail thanks to an impressive late-race restart over Tammy Rice and Kate Tomaino.

“It was hard (to win) but it was a lot of fun,” said Anderson, who is also the sister of Truck Series driver Jordan Anderson. “It was awesome to have the Hermie and Elliott Sadler Foundation on our car. This is for them. The race was tough. It didn’t come easy.”

“It has been really fun getting to know all these ladies throughout the past month and a half. It means a lot to win at the same place my brother Jordan (Anderson) has won.”

Earlier in the week, Anderson qualified her car on the outside pole, immediately putting her into the pool of pre-race favorites, but her inaugural inexperience in the Better Half Dash would not have been possible without the charitable and encouraging support of AM Technical Solutions, Mark and Linda Henderson, Hermie Sadler, Troy Beall, Knight Fire Protection and the many generous online donators.

“I can’t thank everyone enough for allowing me to participate and ultimately win the Better Half Dash,” sounded Anderson. “This was an unbelievably fun and humbling experience and I’m thankful that everything worked out where we were able to raise awareness and money for the Hermie and Elliott Sadler Charitable Foundation.”

AM Team principal Tim Self explained how instrumental Anderson’s victory was in seeing members of the AM Racing team unite.

“Jennifer did an amazing job and it was a memorable experience celebrating in Victory Lane,” said Self. “Even though it was a charity race, the unity of our team during a short race like the Better Half Dash gives us the motivation to keep pressing forward in the NASCAR Camping World Truck Series knowing that the joy and feelings of winning is something we strive for not only for our team, but all of our partners that make it possible.”

The Better Half Dash events have now raised more than $300,000 annually for charities.