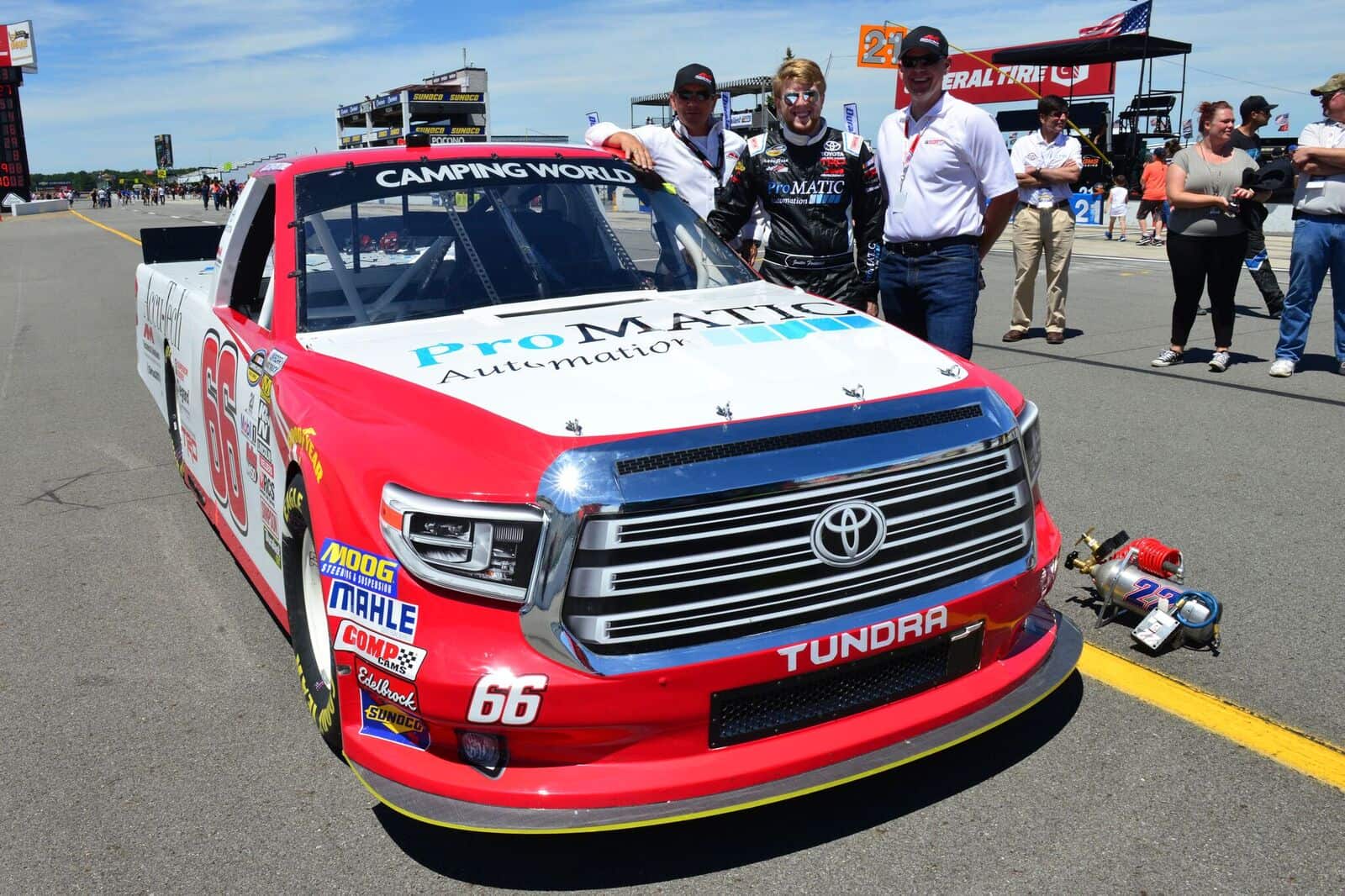 In practice on Friday, Fontaine throttled his AM Racing / Bolen Motorsports-prepared machine to 15th quickest in final practice after turning the 17th lap in the opening session nearly two hours earlier.

While his team led by crew chief Bill Henderson was adjusting his No. 66 ProMATIC Automation Toyota, rain began to fall around the 2.5-mile triangle, NASCAR would be forced to cancel the remainder of the session.

In qualifying, Fontaine admitted he hit the apron of the race track which caused him to lose control of his machine and slap the outside wall.

Quick work by his team allowed them to repair Fontaine’s No. 66 Toyota in time to make the starting grid for the 1:00 p.m. race.

From the drop of the green flag, Fontaine methodically worked his way forward. By the end of Lap 1, the short track ace had maneuvered to 21st.

By the conclusion of Stage 1 at Lap 15, Fontaine had muscled his car to 18th on the lead lap.

Needing help with rotating his truck through the exit of the turns, Fontaine pitted under the yellow flag for tires, fuel and a chassis adjustment.

Restarting 17th “ Fontaine found himself 11th in the rundown at the conclusion of Stage 2, as several of the competitors ahead of him opted to make their final pit stop under green flag conditions.

Deciding to utilize a safer strategy for Fontaine, the 19-year-old made his stop between Stage 2 and the start of Stage 3. Tagged for speeding in the process, Fontaine restarted 24th but through the races final 22 laps, he climbed back through the field to take the checkered flag in 15th.

On Friday afternoon at Pocono Raceway, Fontaine competed in the ARCA Racing Series presented by Menards ModSpace 150. After qualifying 13th, the driver of the No. 33 ProMATIC Automation Toyota Camry lifted himself to eighth in the running order, when he experienced a third straight mechanical failure sending the team to the garage and ending their day prematurely.

Fontaine was credited with a 26th place finish.

“I can’t thank the AM Racing and Bolen Motorsports team enough for their support at Pocono Raceway. We had a very solid No. 66 ProMATIC Automation Toyota Tundra, but the driver made a mistake in qualifying and I put my guys in a tough position.”

“They never gave up though. They worked hard to put the truck back together and it was really competitive during the race. I still have a lot to learn with these trucks, but it was fun afternoon.”

“We went forward, made some changes and the truck responded well. I think we could have finished 14th, but we ran out of laps to catch T.J. (Bell). Of course, I want to thank my team and our partners including ProMATIC, Snap-Track and AM Technical Solutions. They allowed us to race at Pocono.”

“We’ll regroup and see if we can’t have an even better showing in our next truck race.”