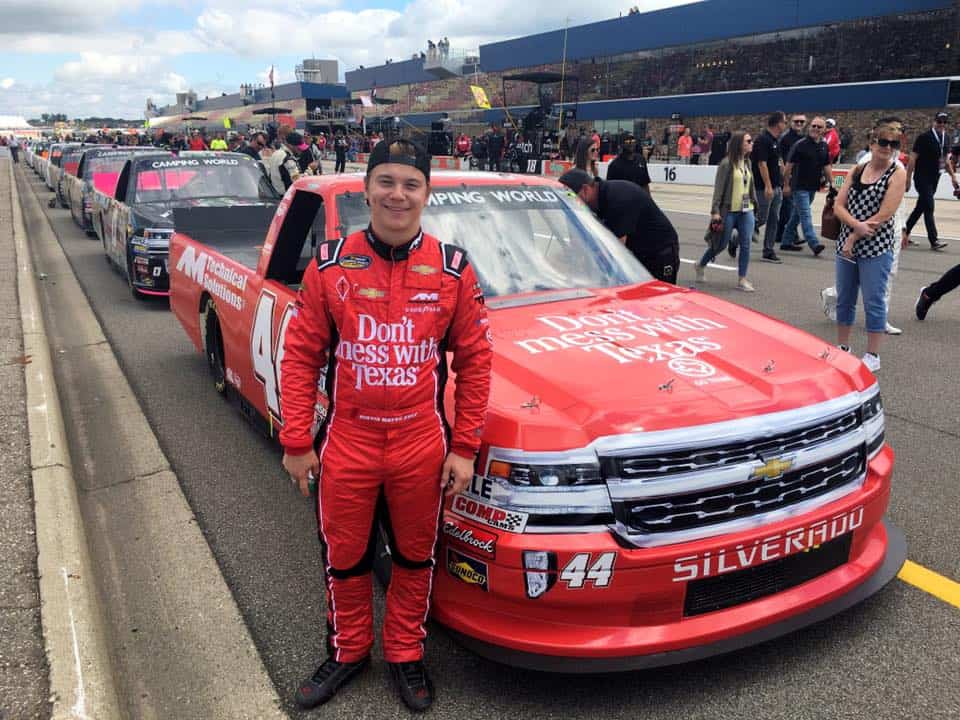 Austin Wayne Self, No. 44 Don’t mess with Texas / AM Technical Solutions Chevrolet

For the second consecutive week, Austin, Texas native Austin Wayne Self impressed aboard the No. 44 Don’t Mess With Texas / AM Technical Solutions Chevrolet for Martins Motorsports in collaboration with Faith Motorsports with a top-15 finish in Saturday’s LTi Printing 200.

Utilizing the two practice sessions on Friday to dial in their race tuck, Self posted the 21st and 18th quickest times respectively during practice at the famed 2.0-mile leaving the team optimistic with a few changes for race day.

In single-truck qualifying on Saturday morning, Self wrestled his Chevrolet bowtie around the Irish Hills race track to the 20th quickest lap overall in a field of 30 trucks. Not particularly worried about the singletruck speed, the avid truck racer was confident that if he was able to maintain a solid pace in the draft, his Martins Motorsports Chevrolet would contend for a respectable finish.

Calling for adjustments to maneuver his truck better through the corners, Self pitted for four tires, fuel and a chassis adjustment, putting him securely in the top-20 for the restart.

At the start of Stage 2, Self continued to march forward and found the top-15 by its conclusion at Lap 60.

Stage 3 saw the race pick up in intensity and Self cleverly drafted through the field to a race-high 13th before being tucked back to 15th when the checkered flag flew in the final 40 laps of the race.

Saturday’s result marked the fifth top-15 and sixth top-20 finish for Self in 2017. Michigan was the second race of the year aboard the No. 44 Chevrolet for Martins Motorsports in collaboration with Faith Motorsports.

Self, 22, has 30 career NASCAR Camping World Truck Series starts to his credit. He holds a career-best finish of second at Daytona International Speedway in Feb. 2017 driving for AM Racing. Self’s career-best qualifying effort occurred at his hometown track of Texas Motor Speedway in June 2017 where he qualified 15th before finishing 12th.

“We had a good solid race at Michigan. I was really proud of the guys on this Martins Motorsports in collaboration with Faith Motorsports.

“We kept working on the truck and it responded with the changes and we were able to hang in there the best we could with the draft and kept our No. 44 Don’t Mess With Texas / AM Technical Solutions Chevrolet out of trouble and earned our first top-15 finish together. This is a good accomplishment for us in just our second race together.

“Looking forward to going to Bristol next and see if we can keep the momentum on our side at one of my favorite race tracks on the circuit.”

For more information on Don’t mess with Texas and how you can become involved in the program , visit dontmesswithtexas.org.

About Don’t mess with Texas:

About the No. 44 NASCAR Camping World Truck Series team:

The No. 44 NASCAR Camping World Truck fielded by Martins Motorsports is a marketing and brand collaboration effort with Faith Motorsports owned by Shane Lamb.