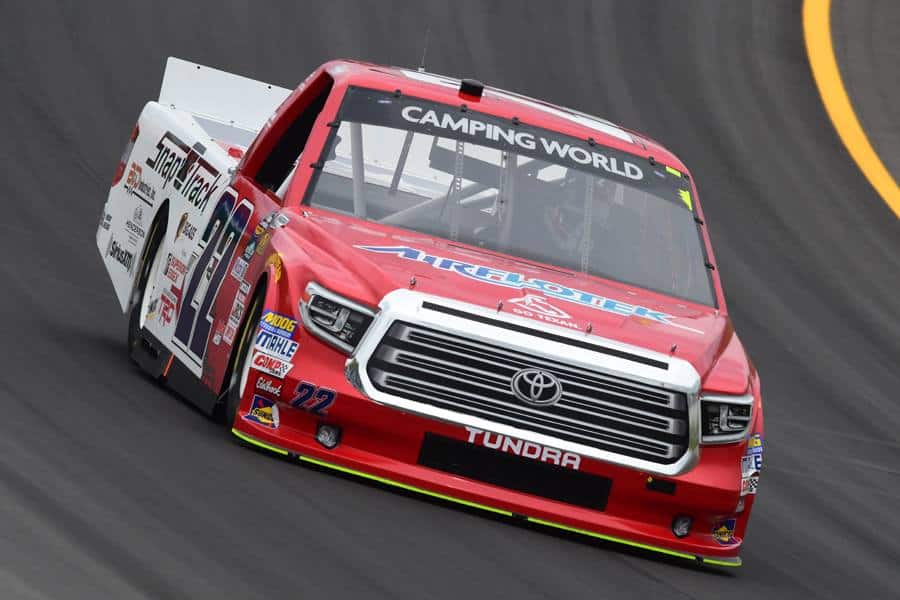 Kentucky Speedway / Buckle Up In Your Truck 225

Quick Recap:
In his sixth NASCAR Camping World Truck Series (NCWTS) start of the season and fourth for AM Racing, driver Austin Wayne Self rallied from a broken fuel pump cable to earn a 22nd place finish in a late night at Kentucky Speedway this past Thursday night.

After practicing well Wednesday, qualifying for the series was ultimately canceled as Mother Nature settled in around the 1.5-mile speedway throughout the evening on Thursday night, also pushing back the start of the race.

Finally, under dry and cooler conditions, Self roared from his 32nd place starting position and comfortably set inside the top-25 before the conclusion of Stage 1 when a mechanical failure set the team to the garage.
A quick diagnosis and the Mooresville, N.C.-based team found the fuel pump cable stopped functioning.
After it was replaced, Self re-fired the engine on his No. 22 Airflotek / Snap Track Toyota Tundra and returned to the race 19 laps down.

Electing to utilize the race as a test session, Self avoided further troubles during the remainder of the Buckle Up In Your Truck 225 and capitalized on attrition to finish 22nd, his track best at Kentucky Speedway in two races.

Driver Quote:
“Thursday night had the potential to be another big night for our AM Racing team. We really wanted to have a good showing for Airflotek, Snap Track and all of our supporters at Kentucky Speedway.”

“Unfortunately, the fuel pump cable broke. That’s not something that happens very often, but the guys did a great job to diagnosis the issue and fix it quickly and we were still able to get back on track and compete for a majority of the race.”

“We knew that our potential for a good finish was out the window, but the opportunity to gain experience and try some things with our truck was still possible. Our finish wasn’t an indicator of our performance and I can’t wait to get back to another mile-and-half track soon, because I think we’ll impress again.”

About AM Racing:
AM Racing is a second-year NASCAR Camping World Truck Series (NCWTS) team owned by entrepreneur Tim Self. Established in December 2015, AM Racing is headquartered in Mooresville, N.C. Operated by Self, a native of Austin, Texas, the team is prided on faith, honesty and intelligent performance. The team has named Austin Wayne Self, Justin Fontaine and J.J. Yeley as AM Racing drivers for 2017.