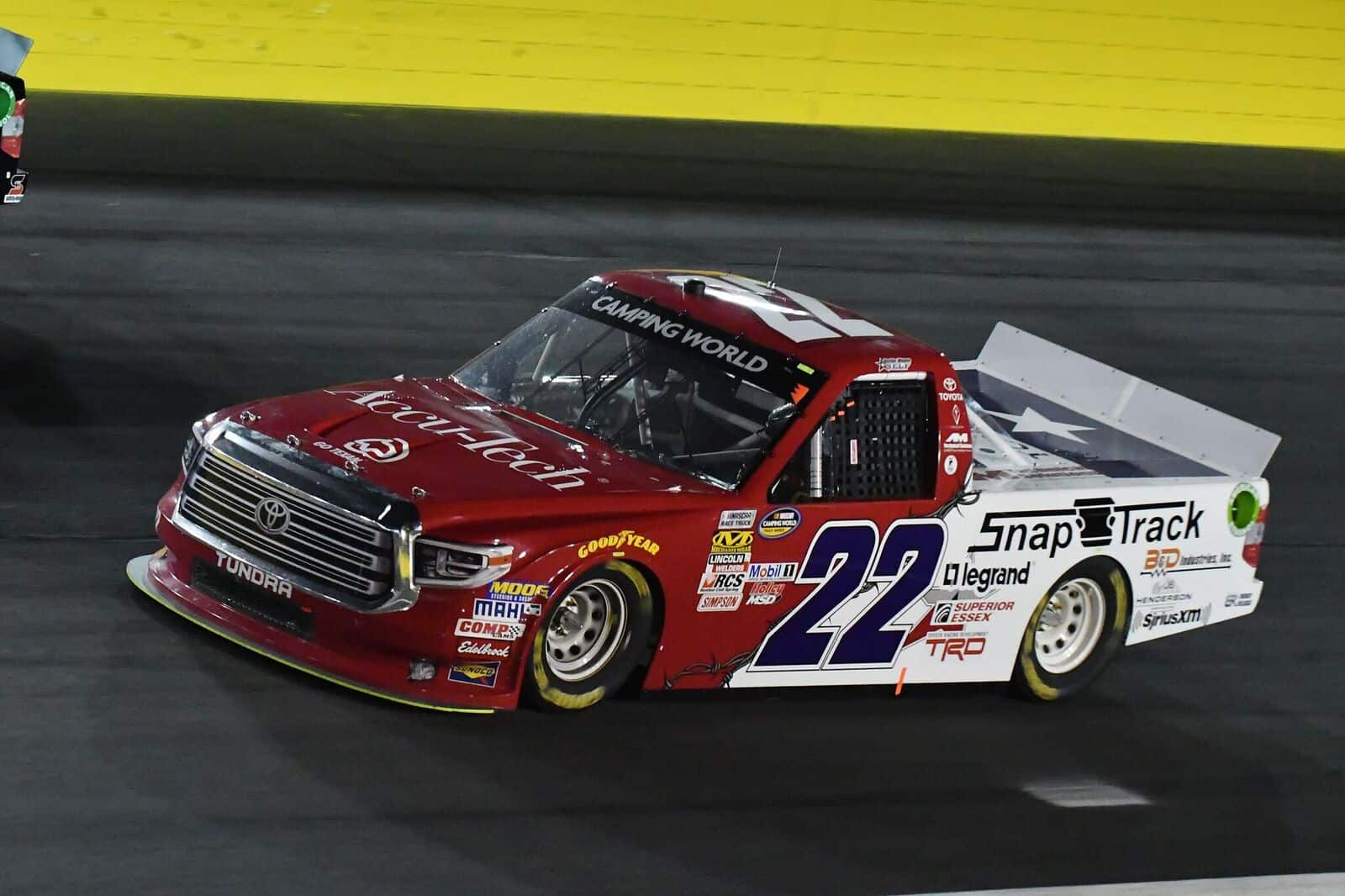 AM Racing driver Austin Wayne Self rallied from a speeding penalty and late-race contact with another competitor to finish a strong 12th in Friday night’s N.C. Education Lottery 200 at Charlotte (N.C.) Motor Speedway in the No. 22 AccuTech / Snap Track / Don’t Mess With Texas Toyota Tundra.

After qualifying 19th, Self ran as high as 10th before being slipping back to 16th inside the final 15 laps of the race. When the caution waved with seven laps to go, crew chief Bill Henderson brought the Austin, Tex. native down pit road for tires, a touch of fuel and a slight chassis adjustment to combat a loose No. 22 AM Racing Toyota.

Rocketing from 16th, with three laps to go, Self utilized the draft and even some side-drafting over the final four and a half miles to edge Austin Cindric for a 12th place finish, a career-best effort on an intermediate track bettering a 13th place run at Texas Motor Speedway last year.

Friday night’s result was the second consecutive top-15 finish for Self after finishing 15th last weekend at Kansas Speedway for Niece Motorsports.

“It was a good night for our No. 22 AccuTech / Snap Track / Don’t Mess With Texas Toyota. We kept adjusting the truck throughout the day, from qualifying to the race and had a pretty good truck during the race. We worked hard to muscle our way from 19th and contended for a top-10 finish before sliding back to 16th late in the game.”

“When the caution came out, we took advantage of the opportunity to pit and it paid off. Really stoked to get a good finish for AccuTech in their debut in the NASCAR Camping World Truck Series and carry some momentum to some of our upcoming races.”

“I also wanted to say I’m glad Regan Smith is alright. It was just hard racing and tight quarters. I didn’t mean to get into him. I hate that happened, but just glad he is OK.”

Accu-Tech is a National Distributor of Voice, Data, A/V, DAS and Security Solutions with 35 stocking locations across the United States.

Accu-Tech and its manufacturer partners continue to distribute and deliver the latest comprehensive solutions available to the market. Partnering with Accu-Tech provides you with the peace-of-mind that the systems installed in your facility will be high-performance and reliable.

Accu-Tech prides itself on providing tailored solutions to your facility’s needs. We have partnered with our manufacturers for over thirty years, providing integrated and scalable solutions for facilities of every size. Accu-Tech’s design specialists provide onsite training and continued education for the all-inclusive systems you use to prevent unauthorized access and provide the highest level of security.

About Snap Track, A product of Techline Manufacturing:

For these reasons, Techline Manufacturing has become a leading manufacturer of domestic instrumentation and electrical support systems including Snap Track cable tray.

Snap Track was designed to transition cables from ladder tray to point of use, while reducing installed costs. Snap Track’s philosophy is simple – Reduce field labor, while supporting and “Protecting the Cable.”